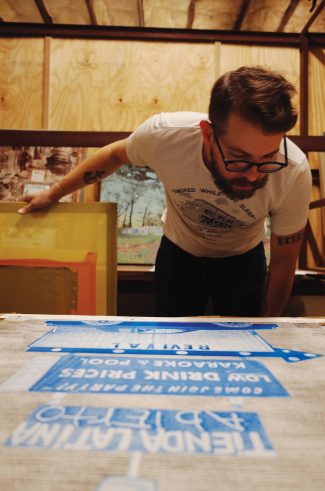 Emily Louise Smith: You grew up on the Mississippi Gulf Coast and now live in Spartanburg, South Carolina. How have these places and others you’ve lived in or visited influenced your work?

Andrew Blanchard: I didn’t appreciate the Gulf Coast until I had some distance from it. For the brief time that I lived away from the South, I missed it in a far more visceral sense than just being absent. I trek back and forth from South Carolina to Mississippi and Louisiana quite regularly, and a camera is always within reach. I make it a point to meander the blue highways, much like William Christenberry. There is no shortage of subject matter within the South’s diverse landscape and environmental variance.

ELS: The overlaps where one place edges or blurs into another—the urban / rural, for example, or the church in Surely a Revelation Is at Hand, which shares walls with a bar and pawn shop—seem to be a pre­occupation in your work.

AB: Those niche pockets of mashed-together culture are interesting, huh? That fringe sector, the acreage between city and country life is visually rich with ironic couplings of righteous and rowdy. Surely a Revelation Is at Hand conveys my interest in documenting these locations, which establish themselves out of present-day economic necessity, societal shifts in belief systems, and the homogenization of traditional Southern mores. I regularly stumble on storefronts or collections of businesses that seem like a collage created in Photoshop—a fundamentalist congregation abuttting a liquor store or den of sin—but nope, they exist in real time, no digital manipulation.

ELS: The cover of this issue is excerpted from a print in your series Urban Removal. Could you talk about this play on the term urban renewal?

AB: Ill-gotten gain is the driving factor in the Urban Removal suite, a pseudo– James Baldwin concept. When one decides to urban renew, in many cases, one also urban removes. Neighbor­hoods change hands every generation or few. That transition finds its way into my work. Southern land management and ownership is a slippery slope.

ELS: How have viewers responded when you’ve exhibited in the communities you depict in your work?

AB: It runs the gamut. I mean, some of the subject matter can be uncomfortable, especially if we don’t sugarcoat the past. A Boston curator with familial ties to our region accused me of displaying a romanticized version of the South, which I don’t think I do, but what can you say? Everyone formulates their own opinion. I can’t change that, that’s not my job. I just give folks something to gnaw on. Some recognize structures that offer personal associations, or react to site specificity, while others respond to titles appropriated from Southern literature. Sociocultural terms and their contradictions really interest me: projects, initiatives, county lines, urban limits, white and black flight. These conventions inspire my compositions—poetic-political-religious-historical narratives—that I hope allow viewers to reflect on their experiences.

ELS: Your large-scale prints on wood panels combine techniques from printmaking, graphic design, and painting. Could you describe the process?

AB: My current approach is a hybridization of my print­making education (process), an interest in contemporary painting (application and support materials), and a means of documenting my subject matter (digital photo­graphy). My works are mostly screen prints; whether focusing on a painterly field of color, a section of texture, or realistic subject matter­, it’s all acrylic ink applied via a stretched mesh fabric. Wood panel is durable and stable. I can layer, scrape, sand, and drip like a painter; but I also have the ability to print on the surface. Though super time consuming, the combination allows for a more convincing narrative in my opinion.

ELS: You’re inspired as much by literature as by visual art. Any books or authors you count as influences?

AB: Words and phrases from Southern fiction help me as I compose images from my digital photo vault. I’m a big fan of Jesmyn Ward; I recently met her through my friend Sean at Pass Christian Books and totally fanned out. When I was at Ole Miss, I used to have drinks on Thursday afternoons with Larry Brown and occasionally Barry Hannah. Their characters are folks like me! I recently finished a galley copy of the final installment of Greg Iles’s Southern gothic trilogy; I didn’t want it to be over. I just started some Zora Neale Hurston, and from time to time, I revisit Faulkner stories. I favor those to his novels. I dig so many authors—Singleton, Laymon, Lane, Watson, Crews, Wright—but Hannah has to be my all-time Southern literary influence. While I work, I listen to the record that The End of All Music in Oxford put out a few years ago, a recording Bill Ferris made of him. It’s a hoot!