Kim Todd is the author of Sparrow, Chrysalis: Maria Sibylla Merian and the Secrets of Metamorphosis, and Tinkering with Eden: A Natural History of Exotic Species in America. Her work has won the PEN / Jerard Fund Award and the Sigurd Olson Nature Writing Award. She teaches in the University of Minnesota’s MFA program and is working on two projects: one on predators and one on the “girl stunt reporters” of the late nineteenth century. 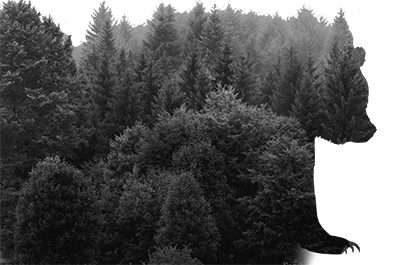 Reports of a large, gray grizzly gathered thick as mist in the North Cascades of Washington State in the 1940s. A hunter after deer near White Chuck Cinder Cone glimpsed a silvery mother and cub. Near Fire Mountain, not far from the town of Darrington, a grizzly with long gray fur and two cubs ran at a man on the trail. She chased him up a tree, raking through his boot to his foot with roughly three-inch claws. After an hour and a half in the branches, he was rescued, carried out on a horse. Roughly a year later, the bear—or a similar one with gray fur that fluttered “like a flying squirrel,” an observer reported—charged at a family of six who were admiring the view from Fire Mountain. The husband shot the bear, who stopped, veered off toward Fire Creek, and then disappeared.

At the time, grizzlies like these were common enough that no one was surprised, but rare enough to make the newspapers. Their longtime presence in this sodden landscape along the Canadian border—characterized by sharp peaks, silver fir forests, and riotous rivers draining them—was memorialized in hunting accounts of the Salish peoples and, later, fur trading records of the Hudson Bay Company. Accounts of bears from white settlers moving in and claiming land during the late nineteenth century carried a whiff of the fable and violence of Davy Crockett tall tales. In 1888, one grizzly was shot with seven bullets, finally dying just a few moments before reaching the hunter. In 1924, an animal referred to as “a monster grizzly bear, whose footprints are as large as an ordinary hat” plundered campsites for bacon. They ravaged sheep, killed cows, and, wounded, left long, bloody trails into the bushes.