Orders received by December 12 will be shipped before the winter holidays.

Ecotone issues 25, 26, 27, and 28 will remain free to read online throughout the pandemic. If you like what you find, please consider subscribing. <3

For a public art project called Confluence I am developing texts and testing reading processes, with the goal of installing mile-long writings along streets where waterways have been hidden underground.

•To See the Veins: My Mississippi Pollinator Garden

Aimee Nezhukumatathil
Before we were married, a man named Dustin would drive four hours from Ohio to western New York to visit me. He smiled and laughed so easy. He dug holes in my yard to plant lilies on his days…
Map  –  Issue 27

•Digging to the Antipode

In 2017, I lived in two antipodal places in Southern Spain and Northern New Zealand, only one hour away from the exact antipodal coordinates for each: Rota, in Cádiz, Spain; and Muriwai Beach, New Zealand. This made them virtually the farthest places from each other I could inhabit— 12,391.34 miles apart. In Spain, I started to make maps that included elements of ancient maps of both Cádiz and New Zealand, superimposed with lines that reference longitude and latitude… 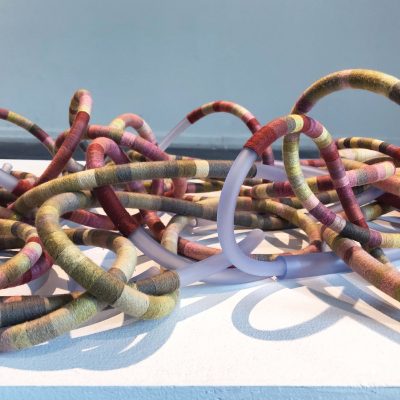 This woven material data map, when complete, will comprise more than three hundred sets of data from the National Oceanic and Atmospheric Administration (NOAA) and over 1,500 feet of thread-wrapped medical tubing.

Stephanie Strickland
I love the sound of bells ringing out in the air. Highly structured ringing sequences were created by ordinary folk in England in the seventeenth century. Their quest was to perform all the permutations—all the different arrangements possible—of seven bells.
Map  –  Issue 23

Alexis Pauline Gumbs
All footnotes refer to Jamaican theorist Sylvia Wynter’s “Ethno or Sociopoetics,” published in Alcheringa / Ethnopoetics 2, 1976, and “No Humans Involved: An Open Letter to My Colleagues,” published in Voices of the African Diaspora 8.2, 1992,
Map  –  Issue 23

Pat Valdata
Found poems from the March 26, 1998, edition of the Dallas Sectional Chart Once, when I was practicing cross-country flights during my pilot’s training, I flew from Salisbury, Maryland, to Lancaster, Pennsylvania. If I was on course,