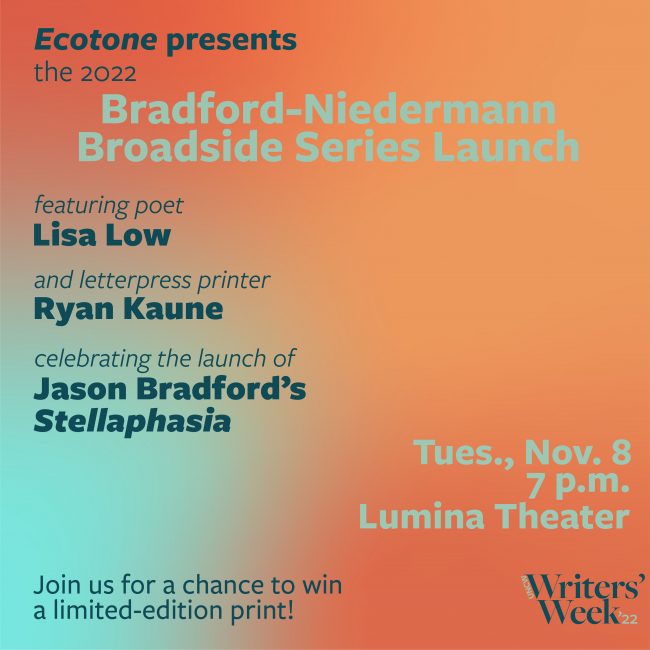 We’re delighted to announce the launch of the 2022 Jason Bradford and Shirley Niedermann broadside series! Join us on Tuesday, November 8, at 7 pm in UNCW’s Lumina Theater, for a reading by featured poet Lisa Low, readings of featured poet Jason Bradford’s work, and a talk by featured printer and UNCW MFA alum Ryan Kaune, who designed and printed this year’s broadsides. All in attendance will have the chance to win one of these limited-edition works of art.


The Bradford-Niedermann series is named for Jason Bradford, who completed his MFA at UNCW and served as Ecotone’s poetry editor during that time, and his mother, Shirley Niedermann. Jason died of complications from muscular dystrophy in 2015. Shirley’s support for Jason made his writing and editing possible; the series honors them both. Featured poems for the series are chosen by Ecotone staff from those published in recent issues of the magazine.

This year, in celebration of the publication of Jason’s debut collection, Stellaphasia, the series features a poem of Jason’s. You can read some of Jason’s poems here. Find more about Jason’s work and about the Bradford-Niedermann series in this introduction to the series. And you can preorder Stellaphasia, due out this December from North American Review Press!


This event is part of Writers’ Week at UNC Wilmington’s Department of Creative Writing, for whose support we are thankful. You can find the full Writers’ Week schedule, including readings and talks by Ecotone contributors Jennifer Tseng and Josina Guess, here.