I remember the first time I heard the remastered version of Nathan Frazier and Frank Patterson’s “Po’ Black Sheep.” It’s on the compilation John Work III: Recording Black Culture, released in 2008 by Spring Fed Records. To hear this song in true-quality audio fidelity was a revelation! The clarity of the record made the song sound like those gentlemen were right there in the room with me. 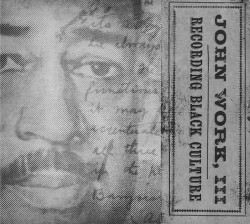 When I began playing folk music, I heard only a few mentions of black string bands, most of whom had been active before the advent of audio-recording technology. A lot of white string bands had recorded in the 1920s and 30s, but most of the secular black musicians who made recordings during that time played in the blues, jazz, and jug-band styles. I knew that the banjo had its origins in Africa, but I didn’t have any clear information showing how those origins were reflected in American music.

The Black Banjo Gathering of 2005 gave me a new perspective. The gathering grew out of a listserv started by banjo scholar and enthusiast Tony Thomas, who made it his goal to discuss black banjo players and string-band music, in part as as a means to show that racism was still prevalent in the United States. He saw the banjo as the ultimate symbol of black survival.

I was in my early twenties when I went to the gathering. There were a few black players, but the event also brought together white musicians, as well as many of the white scholars who had studied the early songbooks referencing these older styles. Several of these scholars created the works that laid the foundation for the acceptance of the African diaspora’s involvement with the banjo.

Among the musicians, Bela Fleck had just returned from a trip to Africa that eventually become the documentary and album Throw Down Your Heart. Filmmaker Marc Fields was putting together a documentary on the history of the banjo, Give Me The Banjo. For myself, I met musicians Rhiannon Giddens and, later, Justin Robinson, and the three of us created the string band the Carolina Chocolate Drops to continue the mission of the gathering while performing the old-time music of the North Carolina Piedmont. We also took the opportunity to champion our main inspiration, black old-time fiddler Joe Thompson, whose family’s songs we performed for years. I still start every one of my shows with Joe’s song “Cindy Gal.”

At the Gathering I heard that I should listen to three main records if I wanted to know this kind of music better: the 1989 album Altamont: Black Stringband Music from the Library of Congress, put out by Rounder Records; Black Banjo Songsters of North Carolina and Virginia, released by Smithsonian Folkways in 1998; and Louie Bluie, a 1985 album and documentary film. Louie Bluie (aka Howard Armstrong) had a string band called the Tennessee Chocolate Drops, and we named the Carolina Chocolate Drops after it. Black Banjo Songsters was an overview of black banjo players who had played the old styles up to the modern era. The album included recordings of Joe Thompson and his cousin Odell.

Altamont was a whole other thing. The album, featuring two black string bands recorded for the Library of Congress, was the beginning of the movement to understanding why black string-band music was important. One track I took a liking to was a side featuring Nathan Frazier and Frank Patterson. The liner notes said John Work III had recorded the duo.

Work was a professor at Fisk University—a third-generation black enthomusicologist, choir director, and composer. (One of his best-known songs is “Go Tell It on the Mountain.”) His grandfather, father, and uncle all completed monumental research and publications on “Negro vernacular music,” at a time when the music of African Americans had not been thoroughly discussed, and especially not by educated Southern black scholars.

Work did these recordings in partnership with the Library of Congress. The government lent him blank records to use on his Presto home-­recording record press, and the Library of Congress then collected the discs back. This might seem unjust, a further act of appropriation of black culture by white audiences, but in the long scheme of things it was lucky: when Work’s papers were damaged by water, after his death, the recordings, including the Frazier-Patterson, were left intact in the Library for all to enjoy. I am thankful to Bob Carlin (whom I met at the gathering, where he was backing Joe Thompson on banjo) for pulling these recordings out of the archive in the first place, and to Spring Fed Records for releasing a larger overview of Work’s fieldwork.

Frazier’s banjo is not a relic of the past. It is just as funky and mesmerizing as Robert Lee Coleman’s electric guitar licks with James Brown.

When I heard the syncopation of the banjo in the remastered recording of “Po’ Black Sheep,” I knew that I was hearing something truly distinct. Though Nathan Frazier and Frank Patterson were not regular playing partners, the sheer rawness of their playing explodes off the record! Frazier’s banjo is not a relic of the past. It is just as funky and mesmerizing as Robert Lee Coleman’s electric guitar licks with James Brown. It is the blackest banjo playing I’ve ever heard.

The recordings Work made of this duo are what made me approach old-time music the way I have. They show that the bluesmen who came later were informed by this older fiddle and banjo music. Charlie Patton knew this sound. Robert Johnson, Howlin’ Wolf, and Muddy Waters knew this sound. Uncle Dave Macon, Roscoe Holcomb, and Dock Boggs—white old-time musicians, some of whom mention hearing black musicians or becoming interested in old-time because of them—also knew this sound.

When I hear Frazier and Patterson, I hear that their music is just that deep. “Po’ Black Sheep” is a rocker’s dream for old-time. That’s why I had to learn the song. It is the foundation of American music.

I listen to this song about once a week, and when I do it’s on repeat.