This morning I am up at dawn, kayak­ing down Hewletts Creek out to Masonboro Island to survey the damage. Homo sapiens were not the only animals to lose their homes when Hurricane Florence hit. Already I have seen that the live oak that held the osprey nest near the creek’s mouth is down. Great gnarled arms of oak upturned, the whole massive root system revealed. Taller than me, it looks more like the root ball of a redwood than a twenty-foot oak. Nine days have passed since the storm hit, as I paddle out toward the mouth of Hewletts Creek. I pass several more toppled trees that held osprey nests, but the skies are full of life, and within twenty minutes I have seen not just ospreys but egrets, ibises, great blue and green herons, terns, and a kingfisher who dives ten yards in front of my bow. What I don’t see are other people. There is an emptiness that reminds me of a greater, more deadly disaster. Just as the skies were free of planes after 9 / 11, today the waters are free of boats.

My initial assessment, looking at the homes along the creek, is that it could have been a lot worse. Rain, yes, we have had a preposterous amount, over thirty inches in some spots, and the Cape Fear River hasn’t even crested yet. But the winds were not the Category 4 or 5 we feared. As I look along the coast, about one in a hundred trees seems to have been downed. It could have been ninety-nine out of a hundred. I was in Monkey River Town in Belize after Hurricane Iris hit in 2001 and all the trees were down. That storm was a Category 4 and made landfall with 145-miles-per-hour winds, devastating not just the trees but the howler monkey population that made their home in them. This sort of arboreal apocalypse could have happened here. We can’t imagine it, perhaps, but it is entirely possible.

Luck is an underrated element of hurricanes, and the lottery of wind is never equitable. For those Dawson’s Creek fans out there, you’ll be relieved to know that Dawson’s dock still stands. Not far from the downed osprey nest, I pass the dock, where a boat is tied up and a fake plastic owl has gone back to work scaring off gulls. I watch a green heron ready for a morning of fishing from the dock.

Not everyone made out so well. A former student of mine, David Howell, evacuated with his wife and two daughters to Charlotte on the Tuesday before the storm. His wife, Jo, sent out a text to friends on Friday, a day after the storm hit, saying it looked like all was okay with their home back in Wilmington. As David tells it, it was less than a half hour later when his neighbor called. It could have been my neighbor Tony, who was watching over my own family’s house while we were evacuated, calling us, but it wasn’t. The neighbor hemmed and hawed and apologized to Jo until she asked him to get to the point. The point, it turned out, was that the huge water oak in their front yard had fallen and crashed into the middle of their house, creating a hole in the roof above their daughter’s room. There was no way for the neighbor, or anyone else, to do anything about the tree, so for the next two days, the rain fell into the house and the winds below through it and a possum took up residence, no doubt seeking shelter from the storm. Since they lived on the creek and had been worried about flooding, they had moved everything upstairs, which was now open to the weather. A microburst also picked up a smaller tree and tore more holes in the house.

The five days before they could get back were days of sheer panic. What’s going to happen to our stuff? What just happened to our lives? And also panic about getting in front of the computer and filing an insurance claim.

“When you lose a house, you lose a family member,” David told me. “It’s like a mother. The ultimate protector.”

Though they would have no place to stay when they came back, as the days passed they felt an increased sense of urgency to return—while knowing there wasn’t much they could do once they got there. Finally, they made their way back, zigging and zagging through North Carolina, avoiding the many flooded roads. They dropped their kids off with a friend and went over to walk through the house. The possum had shat and pissed everywhere, and the walls were wet and dripping.

“We just lost it,” David said.

After about an hour or two of sheer despair, they called their friends and coworkers and cleared out of a house they had lived in for six years in just two and a half days. They’d lost most of their stuff, including everything their daughter owned. All of their belongings were piled up on the street along with the trash.

“That’s another thing,” David says. “I loved that tree, that big water oak, that fell. And there is a sister tree of that tree in my backyard. I don’t want to do it, but I’m going to cut that tree down.”

I paddle across the Intercoastal Waterway to the dredge-spoil island I call Osprey Island, but the nest I named it after is down too. What I find instead is a marooned sailboat thrown up on shore, its twenty-foot-long mast tilts at a forty-five degree angle. I can’t quite make out the name of the boat, but the brand is Buccaneer.

What strikes me again almost immediately, despite the downed trees, is how much worse it could have been. This was a Category 1. There’s no reason a Category 5 can’t sweep in here next week. For all that we have dominated the national news, for all the deaths and destruction, if Iris-like or Katrina-like winds had come through here, which they eventually will, we would be telling a different story, a story far darker and more tragic. And so would the animals. Their lives are more obviously closer to the precariousness that defines all our lives. Nests wiped out, marshes batted down, tree homes gone. We are united with them in our loss. 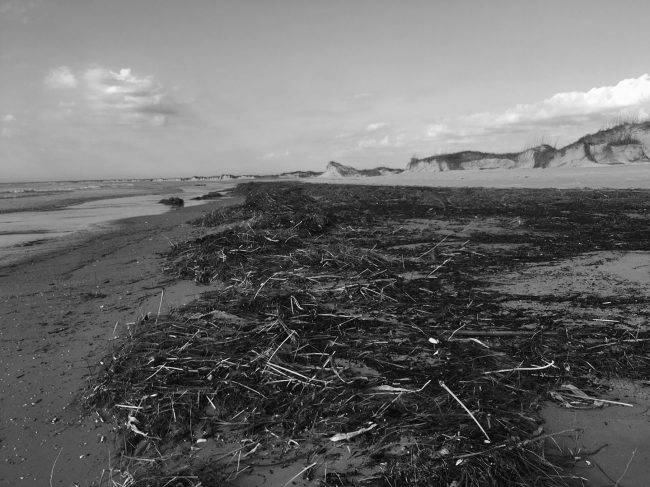 I land on Masonboro with its eight-mile stretch of beaches, dunes, and marshes jutting out into the Atlantic. The beaches act as the front lines for any storm approaching Wilmington, but if anything, it seems to have done better than the mainland. My old camping spot looks pretty undamaged, in part because it is so low, nestled in a cup between dunes. “Stay low” is good general advice during a serious storm, and that’s something Masonboro Island does naturally. It is also something that the owners of the more ostentatious trophy homes on the shore might consider. But what isn’t low out here, at least not after the storm, are the dunes. These are the true front lines, and they have taken a serious hit. Rolling and gradual, smooth and easy during the quieter times of summer, they are now sharp and steep, sheer and clifflike, some twenty feet high. They look like they have been sliced in half—but they have done their job, protecting what is behind them.

While the island never looks hardy, its dunes block the wind and marshes on its back side allow it to receive and interact with the storms in ways a developed island cannot: sand spilling over the island’s interior, the marsh growing behind, the entire island gradually but constantly migrating landward. The coastal geologist Orrin Pilkey has estimated that Masonboro is probably moving landward to the tune of sixteen feet or so a year.

The relative success of Masonboro, however, speaks to the dangers of coastal development. When I hike to the north end of the island, I can see its neighbor, the highly developed Wrightsville Beach, where my family and I once lived, and where the Weather Channel’s Jim Cantore camped out during Florence. Wrightsville Beach, too, got lucky during the storm. Despite massive flooding and damage, the relative weakness of the winds allowed most of its houses to survive. Florence, as bad as it was, was not the Big One. Almost all of the buildings still stand. There is no predicting for how long.

The tide has shifted for my paddle back. The water is a dark iodine color with gray burbling bubbles. The surface is glassy and, looking down, I can see ibises flying above me. But if it is placid and beautiful, it is also scummy. I feel like I am back in the Gulf during the Deepwater Horizon oil spill. The water looks foul, smells foul—is foul. A great stew of pig excrement, corporate chemicals, human waste, and coal ash has been carried down the rivers to the sea. Today was the first time, in any season, that I didn’t take at least a quick dip in the ocean during a visit to the island.

A dusky osprey flies overhead, and I know it has no choice but to take in these poisons. It is the same old story for ospreys. They were the bellwether for the bad old days of the chemical DDT. The story is a familiar one by now: they ate fish contaminated with DDT, and the chemical accumulated in them, at the top of the food chain, through biomagnification. Today it’s a different story, but not so different. The fish are swimming through sewage and the ospreys are eating the fish.

I cringe at the idea of dolphins swimming through the same waters. Living in it. I am careful not to let too much of it splash on me while I paddle. On the trip home, I pass no boats, but come upon two young teenagers, about my daughter’s age, on paddleboards. I don’t want to say anything, don’t want to be a dad, and for a few minutes I keep quiet, just paddling in place. But in the end, I can’t help myself. I imagine them falling off their boards, imagine them jumping in just for fun.

“Please don’t go in the water. There’s a lot of bad stuff in it. Please try to stay out.”

I feel bad for scaring them, but I hope they listen to Sir. The pool of chemicals, waste, and coal ash we are paddling on is a stew made for infection. One swimmer will die from it in the coming weeks. The ban on swimming on Wrightsville Beach will last until October. The beach and sea are no longer a refuge, a place to get away from it all. They are a place where our homes, and our lives, are threatened. They are a place of danger.