1.
I can’t sleep. My mind is spinning. But is that the right word for what is going on? For the associative jumping from one part of my life to another with no apparent reason or order, for those hundred things that flash across the screen—is it a screen?—of my mind at the speed of thought? I said “no apparent reason or order,” but as William James pointed out, you can always, if you take care and time, map how one association, however seemingly unconnected, sparks the next. What you can never do, he added, is predict how those associations will move forward.

There is something inherently manic about this state, a state that I already know, at two o’clock in the morning, will still be going at four. I could stop the spinning (or jumping or cutting or darting or whatever it is) easily enough. There is a little white pill in the cabinet under the sink, and if I break a quarter of it off—such a tiny thing!—and gulp it down, the circling will slow like the last swirls down a drain and under I’ll go. This would be a smart strategy if my only goal was to get to the more focused circling I need to do tomorrow, but for tonight I decide to let it play itself out, to let the circles keep spinning, the thoughts keep jumping. Something could be gained from it—new ideas? (an essay even?)—but this is too pedestrian and utilitarian a goal. Even when I consciously slow my breathing, inhaling and exhaling with exaggerated deepness, I assure myself that the goal is not sleep. Maybe this is a trick, a way to drop down into those thick groggy layers: where the associations slow and grow strange, and things connect more surrealistically and less consciously—and it usually would be just that, a trick, but not tonight. Tonight there will be no goals, not even the goal of peace. Tonight I would rather be awake than drugged.

Soon, instead of focusing on my breath, I am thinking about breath, which, you will admit, is a very different thing. I think about my father’s breath during the last minutes he was alive, how strange and wheezy and animal-like it was, and how much hearing it affected me as I held his hand. Lately breathing has become an important ritual in my life, though I will not call it religion or meditation. I will not even call it self-hypnosis, which is what the psychiatrist called it when he taught me how to do it back when I was twelve or thirteen. He taught me to breathe and count backwards as a way to slow the circling of my own mind—though back then it felt less like circling than a climbing upward toward this central fact: We all, including my mother, my dog, and my self, die. Everything is nothing. I thought this trick of his would never work—just stupid breathing and stupid numbers—and that there was no way I could slow down when I was spinning so fast. In some ways I was right. But in some ways he was.

2.
I keep a pad by my bed and scribble down notes in the dark so as not to wake my wife. I’ve gotten good at this, writing in the dark, though of course sometimes I can’t make out the words in the morning. But tonight, suddenly, it is pictures, not words, that are dancing in my brain, and so I quietly get out of bed and go to the kitchen and turn on the light. I draw the image below. 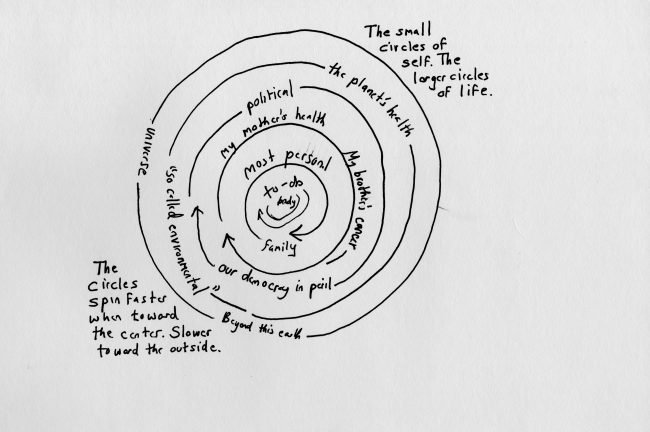 The next day I show this drawing to a couple of friends (which is a quaint, old-fashioned way of saying “post it on Facebook”), and one points out that it is the outer rim of a circle that actually spins faster. I grant that this may be the scientific truth, but I’ll stick to my own subjective one. I like the slower, outer circles and am pleased when my brain can, however briefly, escape the all-­consuming business of being me.

As I finished my drawing, several circle thoughts came to me:

At my best I strive toward larger circles but acknowledge the smaller ones. I understand that I feel largest in my smaller circles but, when healthier, know how small I am. Which doesn’t mean I am only small. The mistake of some people, especially of young people, is to think they are being honest when they define themselves and others by their smallest circles.

3.
One of my favorite lines comes from Emerson’s essay “Circles”: “Our moods do not believe in each other.”

I liked this line so much that I used it as an epigraph for an early book of mine. The problem was that I quoted the sentence from memory, and my memory edited it to make it more appropriate for the book’s subject matter, which was, roughly, my life in my twenties and early thirties. The editors and fact checkers didn’t catch the way I changed the quote either. My epigraph read: “My moods hate each other.”

That made sense for the me of my twenties. Back then the main way I slowed down the circling was by agitating my body. Exorcise through exercise. I would run and jump and lift heavy things and chase after spinning toys made of leather and plastic and otherwise jostle myself in a way that felt good and that fed the smaller self-turned circles of vanity and ego. But the same spinning also did something even better: it shut my mind the fuck up. And in at least this way the body was an ally in my quest to see larger circles. In this way it was a path beyond the self.

The body—the physical self—would seem to be the smallest circle, but it is not. The mind, couched in the body, spins faster. But the irony, or maybe the punch line, is that the mind can comprehend, or at least glimpse, the larger circles. I discovered fairly quickly that a nice combination for me was to jostle my body while in so-called nature. Tress, birds, water. The jostling kept my brain from spinning too tightly and let me see the larger circles of the world outside myself.

But whatever we call it, it is the circle inside the universal circle, the circle of this living Earth, that attracts and concerns me most.

While it has been helpful for me to look at, I do not claim that my little drawing is an accurate reflection of the world or even of my mind. I could have revised it before publishing but I left it just as I drew it, to reflect the mood of that night. I see that the political circle is both strangely positioned and strangely labeled. This no doubt has to do with the fact that in this country we are currently being led by the smallest of circles. We feel the narcissistic swirl, the spin cycle gone so out of control that the washing machine shakes the floorboards of the house. Following our leader, others worship the small and mock and laugh at the large, denying even the existence of larger circles. But it has always been the case, even in more idealistic times, that the political circle, which those within it think the largest, is relatively small. Thoreau, for one, knew that the real news was in the woods.

During that sleepless night, it occurred to me that what my minister sister and minister brother-in-law call God, I call larger circles. This was one late-night thought that I almost threw away in the morning. It certainly doesn’t match my map, and if it did, we would be talking about a very cold and abstract God indeed. But whatever we call it, it is the circle inside the universal circle, the circle of this living Earth, that attracts and concerns me most.

I mentioned above that some young people, especially self-aware, skeptical young people, sometimes define themselves by their smallest circles. My own writing often has at least a tinge of what you would call, loosely, the environ­mental, and my skeptical younger self questioned this habit and focus of mine as I trudged through my life of overconsumption and ambition. But the fact that I do not always live, or think, in this particular larger circle does not make it false. In moments I glimpse it.

We make a mistake when we label this environmental, as I did on my drawing. That makes it sound like just another issue, like nuclear proliferation or the opioid crisis. Those, as important as they are, are smaller circles. The planet, and what we’ve done to it and are doing to it, is the larger circle. We are not talking about an issue. We are talking about the world.

4.
My father died of cancer. I had cancer, too, of a much tamer variety. The fact that I have written about my own sickness so much—“You’re always playing that card,” said a good friend—may be a sign of smallness. Now my brother, four years younger than I am, has cancer, and it’s not the friendly kind. Cancer is the body, the small circle that metastasizes and swallows the large. It would take a very large mind indeed to not react with panic to one’s own potential nonexistence. Or, conversely, a very small pill.

My brother’s mind started spinning faster and faster after my father died. We were both still young, as was my sister, with me the oldest at thirty-five. In response to my father’s death, my sister studied God, the largest circle for some. I wrote books. My brother wrote, too, filling notebook after notebook. For him the words he wrote were vitally important, symbols of great significance, but when I try to read them now they are incomprehensible, the scribblings of an insomniac in the dark. Cancer is the body. It can put an end to the mind’s circling. But in terms of darkness and despair, the diseases of the mind can give diseases of the body a real run for their money.

My brother could not stop his mind’s circling by jostling his body. He did it through medication. It took a while for the doctors to brew the right mix, but eventually the potion was found and the potion worked. Maybe too well.

“I may be dying,” he told my sister the other day. “But my medication doesn’t let me get depressed about it.”

There are lots of places I could jump to now, associatively speaking. To the cancer of the planet. To the loss of Earth’s body and the numbing of Earth’s mind. Or I could end here with something ringing, a paean to the fact that larger circles will spin on, no matter that smaller ones seem to be gaining in strength.

I won’t do either.

I know that our children will pay the consequences for the wild squandering of the Earth we are indulging in now. These are rote words at this point, said many times before by many others, but in moments of clarity, in glimpses beyond myself to the outer circles, I see it all clearly and vividly. What we are doing is beyond criminal: we are hurting those we love, even those we love who do not exist yet. I know that, just as we take care of a dying father or a sick brother, so should we take care of our unborn grandchildren and their children and theirs.

But I also know that we are humans, limited creatures spinning in our small circles, only occasionally able to see beyond, and even less often acting beyond, our small, circling selves.